Greetings! This site has migrated to riversidesci.weebly.com -- please use that site for the most current information! 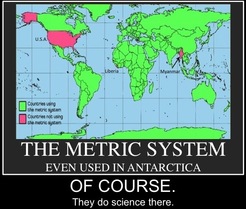 READ: History & Uses
In the United States, we know there are 12 inches in 1 foot and 3 feet make 1 yard. We also say there are 16 ounces in 1 pound and 2,000 pounds in 1 ton. And, of course, 2 pints are 1 quart and 4 quarts make 1 gallon. These measurements are all part of the system of U.S. Customary Units that was developed from the original system of English Units. Americans grow up learning these definitions but the measurements and ratios are completely random and are not used in other countries.

In most of the world, the modern metric system reigns supreme. Officially known as Le Système International d'Unités, or the International System of Units, it is more simply known by its abbreviated name, the SI. This modern version of the metric system has failed to become the standard measurement system in the United States, except for those in science, medicine, government, military, and many sectors of industry. The U.S. is one of only three nations (the others being Liberia and Myanmar) that have not adopted the SI as their official system of weights and measures.


While some form of the metric system has been around since it was developed in France in the 1790s, the modern SI form was introduced in 1960. In 1968, the U.S. Congress authorized a study to examine a process for converting to the new system. The study found that, in many cases, private U.S. corporations that do business with other countries had already adopted the metric system. In 1975, President Gerald Ford signed the Metric Conversion Act into law, formally adopting the metric system as the “preferred system” for U.S. trade and commerce. Then the U.S. government passed the Omnibus Trade and Competitiveness Act of 1988, which made the metric system "the preferred system of weights and measures for U.S. trade and commerce." The legislation states that the federal government has a responsibility to assist industry as it voluntarily converts to the metric system. This is most evident in U.S. labeling requirements on food products, where SI units are almost always presented alongside customary units.

So, if the U.S. government has supported a shift to the SI multiple times, why do we still use the customary units? It is common for people to say the metric system is not used in the United States but take one look at a nutrition label or a mechanical pencil and you will realize that we do, in fact, use metric measurements! Nearly all countries use a mix of metric units and their own, traditional units. Our country does the same and metric is preferred in many professions but we have not adopted the SI as our official, overall system.
WATCH: Metric Videos
PRACTICE: Metric Conversions
Metric units are nice to work with because they are all multiples of 10 apart from each other. Therefore, converting between the units simply requires moving the decimal point!

The primary base units are meters, liters, grams, and seconds but adding a prefix to those base units either increases or decreases the size of the measurement. There are many metric prefixes, but the main prefixes are:
kilo-  hecto-  deka-  [base unit]  deci-  centi-  milli-

Convert from one prefix to the next by simply moving the decimal! For example: 15 meters would be 1500 centimeters because the decimal must be moved two places to the right (centi is two "jumps" right of the base unit). By moving towards centimeters the unit became smaller so the actual number became bigger! 100 times bigger! 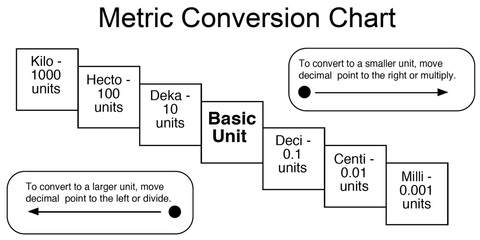 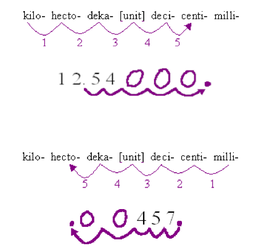 Use the Metric Conversion Chart shown above!
Practice #1: Convert 12.54 kilometers to centimeters.
How many jumps is it from "kilo-" to "centi-"? Five, to the right.

So move the decimal point five places to the right, filling in the extra space with zeros:

Practice #2: Convert 457 milliliters to hectoliters.
How many jumps is it from "milli-" to "hecto-"? Five, to the left.

So move the decimal point five places to the left, filling in the empty spaces with zeros:

Think you've got it? Play this game to see if you can convert between metric units: Build a Shed Game

Try this online practice quiz to test your understanding of metric conversions: Metric Conversions Online Practice Quiz
ANSWER: Discussion Questions
Write your responses and submit to Ms. Hinkhouse
ASSESS: In Class
There will be an open-notes quiz about the Metric System and Metric Conversions.