Greetings! This site has migrated to riversidesci.weebly.com -- please use that site for the most current information!
RADIATION and NUCLEAR REACTIONS
Traditional chemical reactions occur when atoms bond due to their unstable number of valence electrons. However, in 1896, scientists discovered how radiation (energy) was emitted from atoms with an unstable nucleus. This created the study of Nuclear Chemistry. Nuclear chemical reactions involve changes to the particles in an atom's nucleus and therefore can cause the identity of the atom to change! All elements heavier than Bismuth (#83) exhibit natural radioactivity which can cause them to "decay" or break apart into smaller atoms. Essentially, atoms can become unstable due to a large number of protons in their nucleus (positive charges repel each other!) or an unstable ratio of protons to neutrons.

There are three common types of radiation which change an atom's nucleus:
Comprehension Checkpoint 1:
TRUE or FALSE?   Radiation can result in an atom having a different atomic number.

HALF-LIFE
Radioactive decay occurs at a predictable rate for different elements. The rate of decay is reported as a Half-Life which is the amount of time necessary for one-half of the material to decay into a new substance. For example, if we start with a sample of 100 grams of Bismuth and only 50 grams remains in five days, then the half life is five days. And then, five days later, half of the remaining sample would decay so only 12.5 grams of Bismuth would remain. Over the course every five days, half of the remaining sample decays into Thallium through Alpha Radiation. Different types of elements have different half-lives but in general, a shorter half-life means a more unstable element because the sample is quickly decaying. 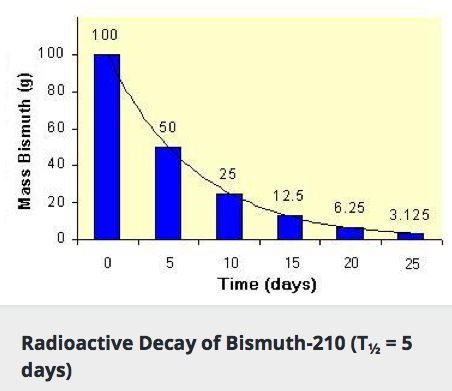 Comprehension Checkpoint 2:
An element has a half life of two days. How much of a 60 gram sample will remain after four days?

STIMULATED NUCLEAR REACTIONS
While many elements undergo radioactive decay naturally, nuclear reactions can also be forced to occur. There are two types of stimulated nuclear reactions:
Comprehension Checkpoint 3:
TRUE or FALSE: Both fusion and fission change atoms into new elements.

TRUE or FALSE: Both fusion and fission release energy.

ASSESS:
The Learning Targets listed at the top of this page will be assessed with an open notes quiz.